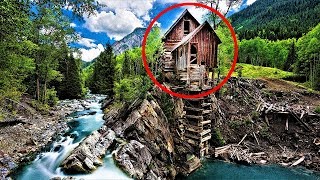 17 Weirdest Places You Might Want To Visit In The USA

People often come to the united states and hope to see what all the amazing landmarks our great country has to offer. With such a vast amount of land, and 50 total states, we could make a really long video on this! Whether it’s strange colorful, geological formations or just strange random stuff you don’t expect to see, here are some of the weirdest places in the US.

10. Lombard Street, San Francisco
This famous road in the US is known for being just a little bit weird. While most streets try their best to stay in a straight path, this road is certainly “the crookedest street in the world”. Although the street is doing it’s best to stay a little bit different from the rest of the streets out there, it’s gotta be a nightmare to drive on! It attracts up 17,000 people during the summer weekends and it’s a weird iconic symbol of San Fran, where it’s okay to not be straight.


9. Walking to the Sky, Pennsylvania
The sky is this limit for this statue. This is a 100 foot statue soaring over the sky at a 25 degree angle. This statue was inspired by the father of the designer. He said his father told him to travel to the sky to talk to a giant that told them what needed to be done back on earth.

8. Tick-Tock the Crocodile
If you remember seeing the movie Hook or are familiar with the story of Peter Pan, you’ve probably heard of Tick-Tock the Croc. The depiction of this immortalized crocodile is found in Mt. View, California at a train station. It features 2 kids sitting on the back of a crocodile which really seems like a bad idea. This has been a famous statue for kids to get on the back of a take photos with.


7. Whittier, Alaska
Outside of a couple cities, the state of Alaska is pretty remote and the rest of the towns are quite small. But could you imagine a city where all the residents actually live in the same building. A 14 story former barracks building was transformed into an interior city. The police department, post office, church, playground and medical center are all found right here. Hopefully they got a fire department too because one flame might bring down the whole city! The population of whittier remains at a cozy 200 people.


6. The Mutter Museum
If you enjoy weird medical mysteries and oddities, the mutter museum might be the place for you. This is most likely one of the weirdest places in the US and the world. Here you can find frightening things like jars filled with peeled off human skin, hippopotamus fat from South Africa, a book bound in human skin and all sorts of horrific things that might keep you up at night Don’t forget about the slices of Einstein’s brain on display that were taken without permission and kept in this ! They also house a large inventory of skulls that were used to see if the craniums hold some sort of anatomical differences from different parts of the world. If you’re not slightly creeped out by this place, there’s something wrong with you.