What The Bloods & Crips Are Doing Wrong

Yo! If you are killing each other then how are you helping any of us defeat enemies who want to see our doom and destruction. The Crips and Bloods are sellouts. Period!

There is nothing empowering about a Crip or a Blood gang member. The Blood and Crips gangs are not positive for Black people in any way. Even though many of them try and say the media portrays them wrongly and try to point out the good that they do, they are perhaps one of the worst things that have happened to Black people since slavery.

No matter how desperate we become and no matter how bad white supremacy is kicking our ass as a people, we should never turn to elements that were designed to harm us. Black gangs were created to destroy and harm Black people period. They are enemies of Black people and poor protectors. Furthermore, I don't want protection from someone who has killed innocent Black people for the hell of it. I don't want someone to protect me who initiates their members by killing other Black people.

What Is So Stupid About Gangs 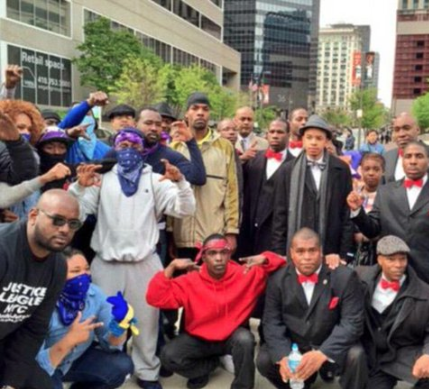 So what do you get when you put a bunch of Black people together? A gang that goes out and hurts or murders other Black people, sometimes killing innocent babies? They really want the media to focus on the good that they do? The mafia has done well for people. All types of crooked organizations have done well. But it doesn't mean that we are supposed to embrace them.

As Black people, we can no longer rely on people who hate Black people to align forces with us. These gangs are trained to hate and kill other Black people. They are worst than the police that they claim they protect Black people from. I don't buy it. If there truly are any good-hearted Black people in any of these gangs, then they should be in something else, other than these gangs.

Why not create organizations with agendas? Businesses? Schools? Why are Black people embracing one of the most destructive things that have threatened the existence of Black people? I think I will take my chances with a police officer.

We can't wait for a large number of our people to wake up anymore. It's too costly! And by the time that happens, we will be in either a worst situation than we are now, or we won't exist by that time. As a people, we need to be dedicated to one thing, which is moving forward. It's either that or we fall victim to propaganda.

If the Bloods and the Crips want to impress me, start a corporation. Put some of that thug money to good use and use it to empower your communities and give other Black people jobs, that don't require killing other Black people. In retrospect, with the creation of gang violence (black on black crime), we have organized our own extermination.

But really, if the Bloods and Crips like killing so much, why go around robbing and shooting other Black people? Is there not anyone you hate more than your own? No one? But the majority of people they kill are Black people who look just like they do. This makes them dangerous.

The Invention Of God Was The Cruelest Hoax Played On Humanity